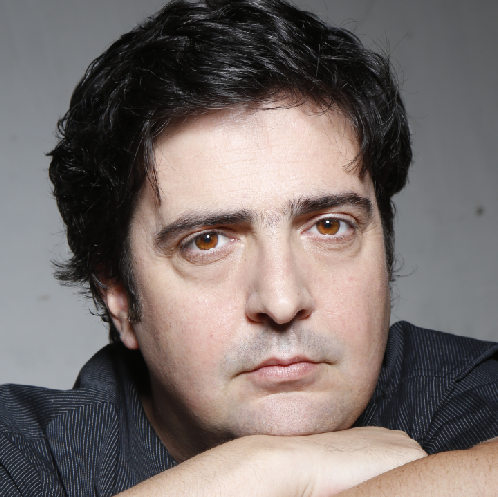 Helder Moutinho was born in Oeiras in 1969. The sea and Fado were always present in his life. From his family he gained the natural love for the Fado, growing and coexisting always in the most traditional means of this art. The thirst for singing has made him part of this universe as enthralling as it is mysterious and complex. He is a Fadista!

In late adolescence, after also identifying with other musical styles, Fado began to gain an increasing importance in his life. The appeal of Lisbon becomes inevitable. After the sea, it is the Tagus who calls for him, revealing the city of the passions, the fado houses, the nostalgic and poetic nights that will inspire him to write his own poetry for Fado. If he initially sang only for friends, the gift can no longer be hidden and he was invited to join, for the first time, the cast of a fado house in Bairro Alto. "After all, the boy also sings," Beatriz da Conceição exclaimed as she heard him sing for the first time. And a compliment from Bia is always unforgettable.

In the fado casual encounters, by night and with other lovers of fado, the first poems of his authorship began appearing and later he recorded them in its first album - "Sete Fados and Alguns Cantos" (1999). A debut that can be considered "miraculous": its recording goes hand in hand with the development of another fundamental side of Helder Moutinho. The "will to make happen" led him to production and management, first at HM Music and now at MWF - Music Without Frontiers. Helder Moutinho is an architect of dreams.

He began singing in the Nónó, at Bairro Alto, Lisbon, in 1994, when he participated in the Fado Cycle of the Mãe d'Água within the Lisbon European Capital of Culture; he joined the cast of Taverna do Embuçado alongside artists like Beatriz da Conceição, Celeste Rodrigues and Teresa Siqueira, where he sang for seven years, and in Parreirinha de Alfama where he performed alongside Argentina Santos.

In its quest to recreate the atmosphere of the Fado gatherings of times gone by, his name is still closely linked to the birth of some of Lisbon's most emblematic Fado Nights: the opening of the Mesa de Frades in 2003, the nights at Chapitô, near the Castel; the serões in the Bela - Vinhos e Petiscos, in the Mouraria; the Saturdays spent in the Fábrica do Braço de Prata; until the most recent recovery of the mythical House of the Severa in the Rua do Capelão, where Maria da Mouraria was born, finally his own house of Fados.

Since his 1999 debut with "Sete Fados e Alguns Cantos", Helder Moutinho has released four more albums - the average of a new album every four years, the time it takes to think, ponder and mature each one, all of them obeying a concept, a will, an idea or conviction: “Luz de Lisboa” (2004), which earned him the Amália Rodrigues Prize, "Que Fado É Este Que Trago" (2008), "1987” (2013) and "O Manual do Coração"(2016). Albums that earned him the highest accolades from the specialized critics and the growing affection and admiration of the public, in Portugal and many other countries. In 2018 he received the Prestige Prize at the 2nd Gala of the Fado of the Voz do Operário, in Lisbon.

It was through poetry that Helder Moutinho entered Fado and, besides being a fado singer, Helder has developed this side of writing poems to fado, singing them many times and giving them to others to sing: Celeste Rodrigues, Mísia, Joana Amendoeira, Ana Laíns, Aldina Duarte, Chico Madureira, Marco Rodrigues, Raquel Tavares, António Rocha, Mafalda Arnauth, Marco Oliveira and, outside the fado, Amor Electro. He is also the author of the music of some fados and ballads that already recorded. Helder Moutinho was at the origin of Quinteto Lisboa, singing alongside Basque fadista Maria Berasarte and João Gil (guitar and composition), José Peixoto (guitar), Fernando Júdice (bass) and João Monge (poems).

The same João Monge who contributed a quarter of the poems to the album "1987" - the other "quarters" were shared by Pedro Campos, José Fialho Gouveia and Helder Moutinho himself - and with all the beautiful texts that can be heard in "O Manual do Coração", his latest album of originals.

And in this case, the word "originals" has even more justification because all the songs were written for his voice. In "O Manual do Coração", Helder Moutinho and João Monge invited to the composition some of the most important songwriters of Portugal: Zeca Medeiros, Manuel Paulo Felgueiras, Vitorino, João Gil, Pedro da Silva Martins e Luís José Martins (both of Deolinda), Ricardo Parreira, Marco Oliveira, Carlos Barretto and Mário Laginha.

A team that - together with its musicians, notably Ricardo Parreira, one of the greatest figures of the Portuguese guitar and Helder's companion for many years - has contributed decisively to every fado and every song, every poem and every story told in this new album immediately entered in the History of Fado and make "O Manual do Coração" a milestone in this same History.

Following this remarkable course, and while preparing the edition of a new album for the beginning of 2020, the new show of Helder Moutinho could only be called ... “Escrito no Destino” ("Written in Destiny").
Back to top