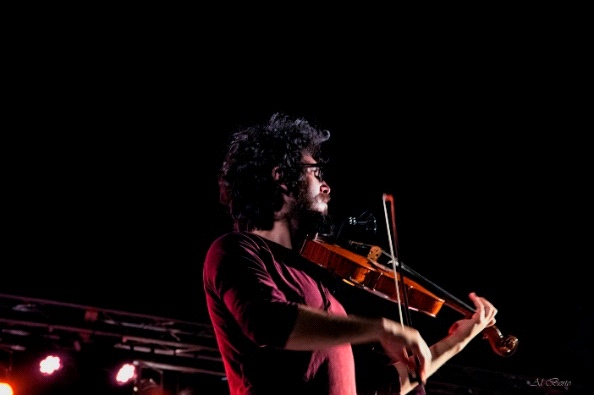 He began his musical studies at the age of 10, at the Regional Music Conservatory of Setúbal, where he was part of the violin class of Professor Nicolay Lalov. He completed the 5th degree of Piano, the 7th degree of Violin and the complementary course of Musical Formation, in 1998. In that same year, he entered the Music Degree at the University of Évora, in the Violin class of Maestro Max Rabinovitsj.

He composed and interpreted the music for the pieces “Graças e Desgraças na Corte de El-Rei Tadinho, o Iluminado”, by Alice Vieira; “Lúculo”, by Bertold Brecht; “As Mulheres de Atenas”, by Augusto Boa, and “Mãe Coragem”, by Bertold Brecht, brought to the scene by the Teatro do Rio, in Alcácer do Sal.

With the group AgoraTeatro - Theatre of objects and music, he composes and interprets music for the shows “Tútú!” and “Uma Grande Árvore”, created in residence at the Pedagogy and Animation Center of Centro Cultural de Belém, with the artistic support of Madalena Victorino. Co-creator and interpreter of the show “Tamborilando”, for babies and children up to the age of five, commissioned by Pé-de-Xumbo - Association for the Promotion of Music and Dance.

With C.A.L. - Community of Free Artists, composed and interpreted the music for the show “Teatro” by Emma Santos and for the show “A Rua Cheia”.

He composed and interpreted the music for the show “Paradoxo ou Desperdícios de Vida Num Fundo Amargo de Memória”, with texts from the poetic universe of Nuno Júdice and staging by António Revez, in a production by the theatre Lendias d 'Encantar, in Beja, integrated in the cycle An Actor / A Musician.

He composed and performed the music for the play “O Abajúr Lilás” by Plínio Marcos, staged by António Augusto Barros, in a co-production between CENDREV and A Escola da Noite - Coimbra Theatre Group.

Currently, he is studying Viola de Arco with Professor Jean Aroutiounian, in the Music Degree at the University of Évora.

He currently integrates the string ensemble Artera, with which he premiered in 2019 the work “A Cachoeira de Paulo Afonso”, by Danilo Guanais (Brazilian composer of the armorial movement), at the National Museum of Music, in Lisbon, within the scope of EuroFIMUS - Festival International Music Campina Grande (Paraíba, Brazil).

He collaborates regularly with the Alentejo Orchestra (ACODA) and occasionally with the Cascais and Oeiras Chamber Orchestra.