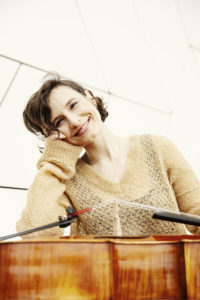 Isabel Vaz was born in Lisbon, Portugal, and started playing the cello by the age of seven. Isabel lived and studied in Lisbon until 2007, the year she moved to The Netherlands. She completed her bachelor and masters degrees at the Conservatory of Amsterdam with Dmitry Ferschtman. During her studies she did two exchange semesters, one in Prague (HAMU) and the other one in New York (Manhattan School of Music).

Isabel was the cellist of Quartetto Indaco between 2013 and 2015, having performed recitals in several halls and festivals in Italy and all over Europe. The quartet studied under the guidance of Oliver Wille in the string quartet program at the Hannover Hochschule.

Isabel is currently based in Amsterdam, The Netherlands, where she is actively working as a chamber musician. In 2015 she was appointed a tutti cellist at the Noord Nederlands Orkest (part-time 50%).

Isabel has a duo with the concert pianist Vasco Dantas, with whom she also shares the artistic coordination of Algarve Music Series, an International Chamber Music Festival in Algarve. Its 5th edition will take place in Algarve in October 2020.